Did you know 80% of street sex-working women are homeless? Does that shock you? Join us on Friday 2 March at the annual Sleepout in Pip’n’Jay Church grounds, to change the story. Find out why these three Sleepout heroes did just that.

“The situation that the women One25 help are in shook me to my bones, I would not wish it on my worst enemy…this is why the work One25 do is invaluable.

My sponsorship ended up being £853.50 which I’m told will fuel One25’s outreach van for 6 whole months giving vital support to the most vulnerable women. This is the real difference that my kind sponsors made, actual help to real people trying to exist in the hardest of circumstances.

As for the night itself we were fairly lucky as the temperature was relatively mild for February. We did get a bit of drizzle early on but fortunately this had stopped by bed time. I did get some sleep although it wasn’t the best I’ve ever had. However, the thought of having no other option but to sleep rough every night reminded me how lucky I am to have a roof over my head.”

“My colleagues were all doing half marathons and 10ks to raise money and I’m far too lazy for that, so lying down and going to sleep is something I know I can do! On a more serious note, I wanted to have some idea of what it was like for street homeless people, although I realise it is very different.

I actually slept due to ‘over the top’ preparation. The preparation was a reflective experience in that, with each thing I did for myself I was able to think about real street homeless people not having access to the same resources as me. I have taken part in the last two years and have just signed up for my third. I never thought I would be able to raise over £1,500 with just a sleeping bag!!!”

“2017 was the year of a big birthday for me. I decided that I wanted to challenge myself as a way of marking my half century, so set myself the task of doing one thing per month that I’d never done before that would test me in some way. Memories of the night that I slept outside for One25 will perhaps stay with me for longer than the rest of the year’s highlights.

One25 organised the event really well: it was reassuring to meet many of my fellow sleeper-outers in advance and to gain some top tips (#1: you can never have enough cardboard; #2: make sure that you are prepared for rain, even if it is not forecast!)

It was only for one night – these women are outside 365 nights of the year in all weathers – yet I hope that the money raised (over £1,150, woohoo!) will help, and I’m pleased that my friends and colleagues who supported me are now talking about it. Through doing this, I’ve heightened awareness of the lives of women living so physically close to me but, in some ways, worlds apart.

I didn’t sleep brilliantly, but as I lay cosily in my two sleeping bags (one inside the other – Top Tip #3), I began to play around with some ideas that became a poem…” 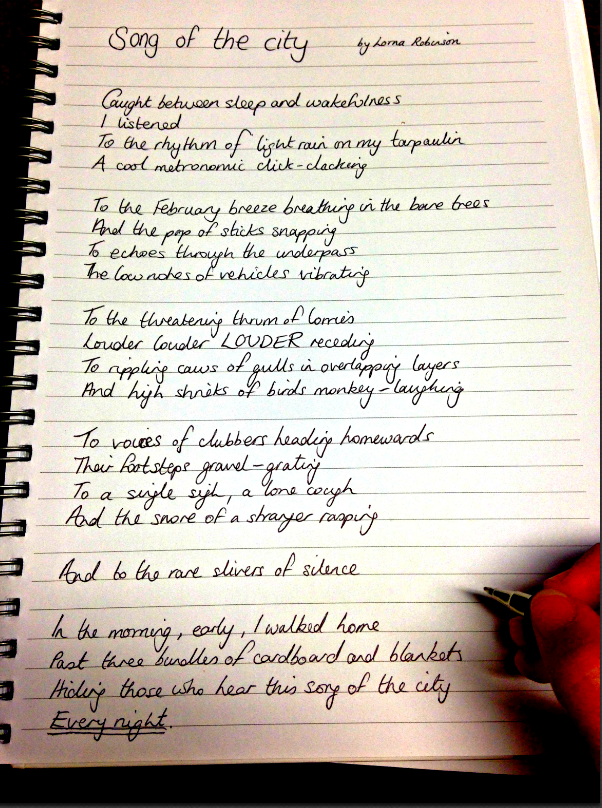