One25 wouldn’t be able to do what we do without the action of our supporters. Your donations, prayers and events all go a huge way towards helping women break free from violence, poverty and addiction. To celebrate the hard work, generosity and all round amazing-ness of you, our fabulous supporters, we’re sharing a series of stories about some wonderful folks that have recently fundraised for One25. Anyone can be a fundraising hero, and we hope you find these stories inspiring.

There’s just no rest for some of our dedicated supporters! Kayleigh raised an incredible £968 by taking part in the One25 Sleep Out. Not only did she sleep out on Bristol’s streets for one night, but she was also a social media superstar, chatting on Instagram and LinkedIn and really engaging her audience. She wrote this article to talk more about her Sleep Out experience.

‘By midnight the rain had calmed, and the cold of the night was setting in. Putting on another two layers whilst I sat under my parasol-size umbrella, on my dry tarpaulin, my thoughts sunk to the actual homeless people not afforded these “luxuries”, but instead are sat cold, wet and most likely, hungry somewhere. That thought filled me with a sadness I can’t begin to describe.’ 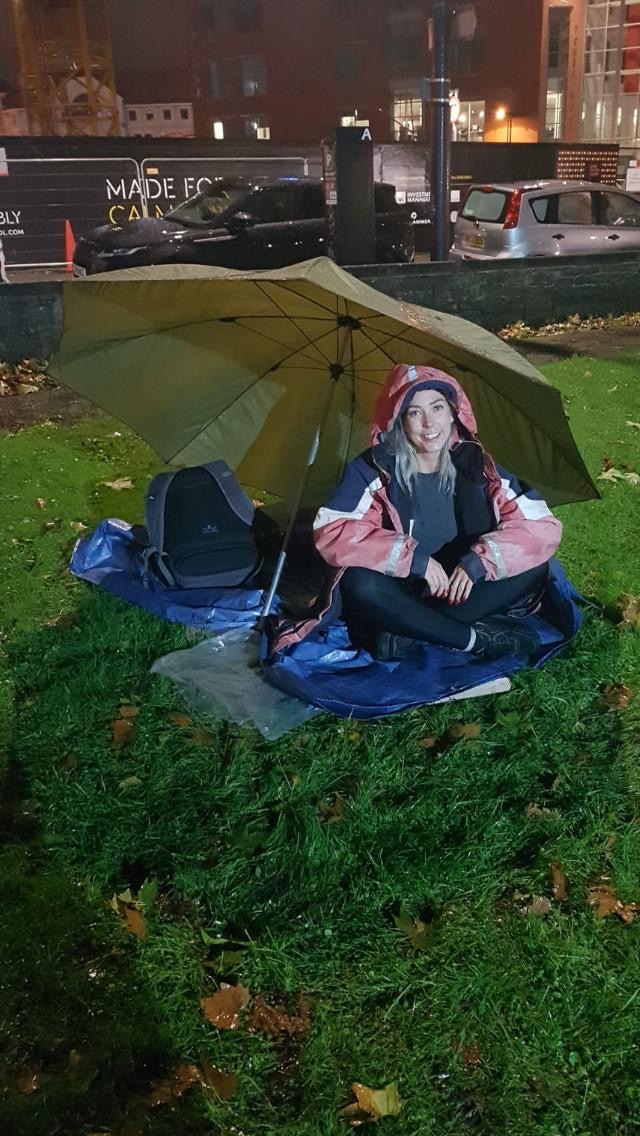 What had the start of the evening been like?

‘The couple of hours prior had been filled with chatter. A group had formed around where I was sat; conversations on one another’s journeys, their past experiences with One25 and other charities was an enlightening couple of hours in which I learnt about the amazing but nerve-wracking work others had done and intend on continuing to do. Like new friends camping out I was painfully aware of how our ‘Sleep Out’ was a mere taste of homelessness, compared to the brutality of living on the streets.’

And as the night went on?

‘Near 1am, I unwrapped myself from my multiple layers and made my way over to the outbuilding which I’d not yet ventured into, but was open for all of those doing the Sleep Out. Inside, I was greeted by warm, friendly faces with the offer of a hot drink before the kitchen closed. It had been 5 hours since I had anything warm to eat or drink so I leapt at the kind offer and also took the opportunity to fill up my hot water bottle and use the facilities; the toilets were of a higher standard than many restaurant toilets I’ve used!’

What did you notice when sleeping out?

‘Armed with a hot drink and my cosy hot water bottle, I settled back into my sleeping bag and listened. The sound of the city is loud; car engines revving, people shouting, rustling sleeping bags and waterproof sheets. I found peace in listening to the rain, melodic and of steady rhythm, it was like the orchestra for the City, making all the other noises less, “noisy”.’

Did you manage to sleep?

‘Getting to sleep wasn’t easy. Though well protected from the elements, the rain kept finding a way into my “home”, the noise I struggled to sleep through, and the cold kept waking my mind and body up from the brief moments I was able to drift off. I questioned if this was due to my body not being used to these sorts of conditions or if this was another thing homeless people also had to tackle night after night. I’d often wondered why so many homeless people sat on pavements during the day, motionless. I’d wondered why they weren’t moving around, keeping themselves warm but now I can guess why, they simply don’t have the energy to move.’ 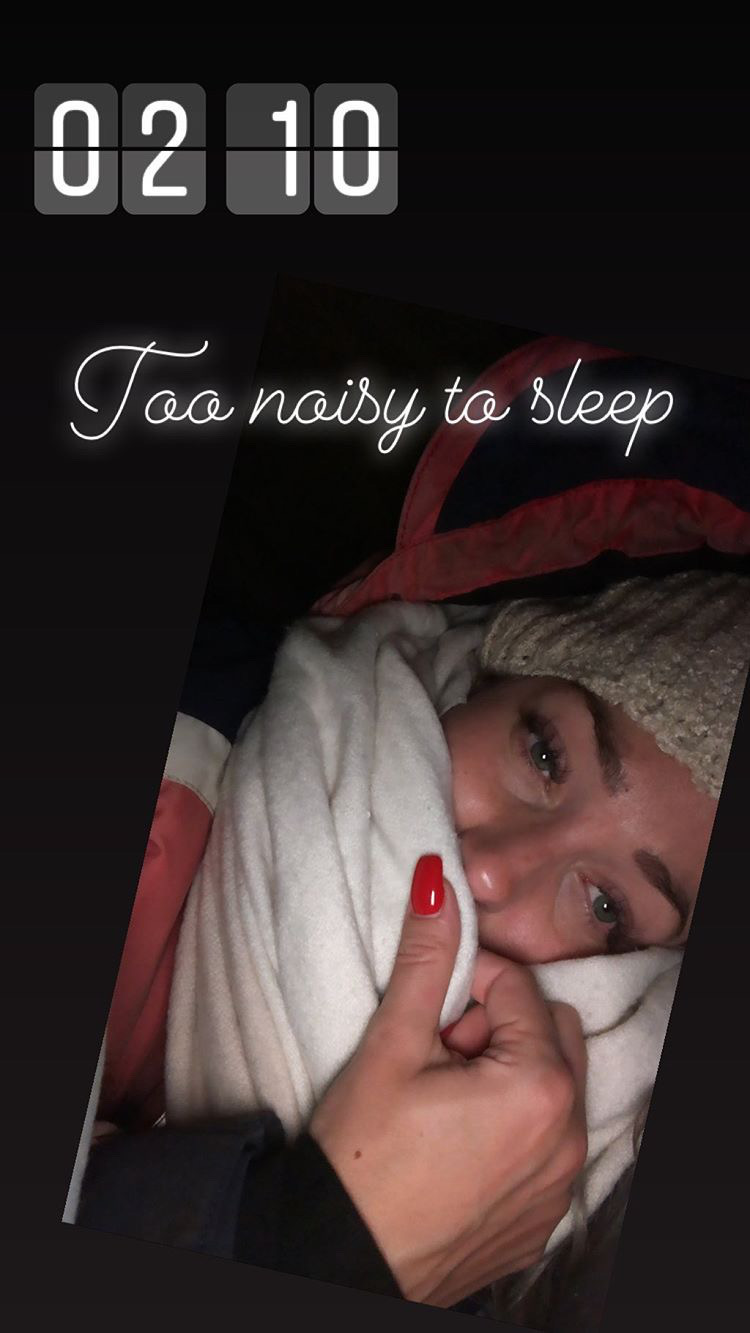 How was the morning?

‘Around 5am I could hear talking so decided to give up trying to sleep and headed towards the kitchen. The volunteers who had been in the kitchen only a few hours earlier were incredibly already back, along with volunteers from St John Ambulance. An array of juices and breakfast bars were laid out to re-energise the participants of the Sleep Out. Getting a hot chocolate, I initially stood listening to the stories being passed back and forth but with every story, came a dozen or more questions and with that, my eyes were opened even more.’

What did you learn from taking part?

‘I learnt many things; what shocked me the most was learning how some homeless people will, from time to time, commit a crime to purposely be put in jail. Why though? To know they have a bed, a shower and a meal every day. Rehabilitation can be such a far-away dream and what I would view as my worse nightmare, they see as salvation for a short time. Statistically, though Bristol hasn’t the highest population of homeless people in the UK, it does have the highest percentage of homeless with drug addictions. Charities like One25 recognise this and though would love to help eliminate the problem altogether, they always help where they can and encourage safety.’

How did it end?

‘The sun was still not up when I was able to leave. My chariot arrived and my knight in shining armour (aka Dad), came to pick up my belongings and what was left of me and take me home to the warmth and comfort of my bed. The thought of getting into my bed had kept me going all night, I counted down the hours until I could lie with my arms out of the covers with the warmth of my home protecting me. This thought gave me strength yet when you’re homeless, your strength must come from somewhere else as while I was catching up on sleep, their days were only just beginning again.’

How did you feel immediately afterwards?

‘Once home, the most striking thought I had; which I hadn’t considered, was being able to delayer from my multiple layers of clothing. Necessary yet not quite enough, my clothing had provided me with just enough warmth yet restricted my movement and filled me with a sense of suffocation. Peeling each layer off, the bottom layer leaving an imprint deep in my skin, I jumped into my bed and looked forward to catching up on sleep, which I did for five glorious hours.’

What is your main take-away from your experience?

‘That was one night. Some of the people One25 help have been repeating that cycle for years! And in the midst have the long days, the agonising search for enough money to provide them with basics such as water and somewhere to wash, food and of course, somewhere to sleep the next night. The desperation for this is one of the reasons homeless women move into sex work. Degrading and dangerous it’s not a life many would choose and it’s a hard life to leave once in.’

‘I am truly thankful for One25. For existing to help vulnerable women and for opening my eyes. The Sleep Out wasn’t easy but it was worth it’

I want to get involved!

We are blown away by the supporters that get involved in our mass-participation events. Kayleigh was part of an amazing team of 24 Sleep Outers raising over £16,000 in 2019. If you want to be a fundraising hero like Kayleigh, email events@one25.org.uk to make sure you’re the first to hear about future fundraising events.